“It may be the way the cookie crumbles on Madison Avenue, but in Hong Kong it’s the way the egg rolls.”
-Robert Orben

END_OF_DOCUMENT_TOKEN_TO_BE_REPLACED

“Work! Labor the asparagus me of life; the one great sacrament of humanity from which all other things flow…”
-Sean O’Casey

I have found myself less and less compelled to cook lately and therefore, not compelled to write at all. While I do enjoy making meals for my roommate, I recently came to the conclusion that I just miss cooking for my boyfriend… Then I looked around and realized that I had sent myself back to the 1950s, so I fixed my hair, popped a mother’s little helper and tried to think of a dish that I could load with butter._

Just to clarify, I’m joking about the drugs and fixing my hair.

END_OF_DOCUMENT_TOKEN_TO_BE_REPLACED

“Such young unfurrowed souls roll to meet each other like two velvet peaches that touch softly and are at rest; they mingle as easily as two brooklets that ask for nothing but to entwine themselves and ripple with ever-interlacing curves in the leafiest hiding-places.”

_ _ I recently had a friend make fun of the fact that “aioli” is just a decorative word used to get away with serving people more expensive mayo… Fair enough. But when you add things like garlic and fresh basil into the mix, it’s so much more than just mayonnaise; it no longer makes me want to die at the thought of dipping vegetables in it; it makes me feel like a fancy lady. And to your friends who don’t know what aioli is, it sounds like you put in a lot more effort than throwing a couple of ingredients into a blender.

END_OF_DOCUMENT_TOKEN_TO_BE_REPLACED

_ _ Lazy food is just the best. Food that you can throw together and look like you’ve spent time preparing it, while really you just sat around in your pajama jeans and caught up on True Blood… This post is not autobiographical.

END_OF_DOCUMENT_TOKEN_TO_BE_REPLACED

“I don’t often have the luck to dream like this. It is new to me for a nightmare to lead to a lobster. It is commonly the other way.”

-G.K. Chesterton, The Man Who Was Thursday

_ _ In life, my mom’s father has been both financially lucky, and savvy. A career in the Air Force allowed him to retire with multiple pensions: savvy; a company paid him to allow them to put up a cell phone tower on part of his several acres (and then didn’t stop paying him after the tower was no longer in use): savvy and lucky; he hit natural gas on his land and now can power his home for free: lucky; he created four ponds in which to raise catfish for profit, but they have now become his friends and pets, and at 89 years old he still makes the walk to them every day to feed his babies: funny.

_ _ I love my grandpa and I love these smoked salmon biscuits. They’re intended to be an appetizer, but filling enough to be dinner… and because they’re similar to a bagel with cream cheese and lox, I currently feel justified in eating them for breakfast as well.

END_OF_DOCUMENT_TOKEN_TO_BE_REPLACED

“An egg is always an adventure; the next one may be different.” 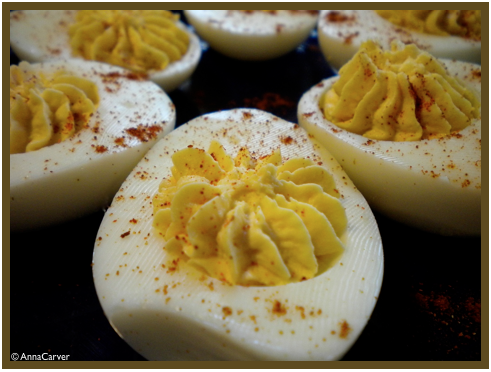 _ _ I’ve always been an obnoxious stickler for grammar, spelling and pronunciation. Even in text messages I refuse to accept the replacement of “your” for “you’re”… they’re not the same word, dagnabbit! My first two years of college were spent wandering aimlessly from class to class, as I remained an Undeclared major. I should have known that I was meant to study English– I’ve always had an undeserved sense of superiority, dating back to my days in preschool. One of my clearest memories from the pre-K classroom is severely reprimanding my friend Tina for continuing to pronounce the word “yellow” as “lellow.” What a pleaseant child I must have been.

_ _ These deviled eggs are not your typical mayo-filled kind. After taking an entire BBQ chicken salad-pizza and pumpkin sheet cake to the face, I decided to try some healthier food for the next couple days, and thus these babies were born. The “lellows” are mixed with roasted red pepper hummus and light sour cream– so eat up, and revel in the sense of well-being that eating healthy and knowing how to properly contract words gives you!