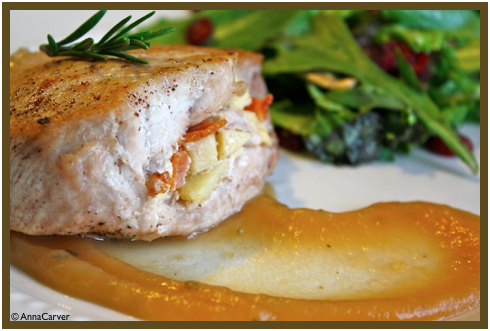 Ingredients:
FOR THE PORK CHOPS

3 (.4oz) Pork Chops (you want thick ones that you can slice open for the stuffing)

Salt and Pepper, for seasoning the meat

Pepper to taste (I didn’t use any)

1. To get the applesauce started, preheat the crock pot to high while you peel the apples, and chop the onion and rosemary. Put all the ingredients together in the crock pot and stir to mix them all together. Put the lid on and allow it to cook down until the apples are soft (about 2 hours) stirring every 20 minutes or so. If you’re doing this on the stove, just cook on low and stir more frequently to prevent burning.

2. About an hour and a half after you’ve started the applesauce, preheat the oven to 350°F.

3. Begin preparing the pork chop stuffing. Cook the bacon down in a large sauce pan and remove it when it’s nice and crispy, reserving the fat in the pan. Chop the apples, grate the gouda and in a bowl, mix them and the crumbled bacon together.

4. Make a deep pocket in each of the pork chops– Don’t cut them totally in half. I made a slit 2-3 inches wide and then ran my knife around the inside, so that there was a good amount of room for the stuffing, but it wouldn’t spill out.

5. Reheat the pan that has the bacon grease in it to medium-high while you stuff the pork chops. Season the meat with some salt and pepper and lay them in the pan to sear each side until it has a nice golden brown color. I used tongs to flip them so I could make sure the stuffing was staying inside.

6. Wrap the pork chops into little packets with tin foil and put them on a baking sheet. Allow them to finish cooking in the oven for about 18-20 minutes– I get very paranoid about cooking meat, but the tin foil helps let me make sure things are cooked through, while not drying them out.

7. When the chops are in the oven, put the applesauce mixture into a blender and puree until very smooth. When the pork is ready to be served, spoon the sauce onto a plate and place a pork chop on top. I would recommend serving it with a side salad to lighten the meal.