_ _ Despite being raised by two fairly sensible adults, as I grow into an “adult” myself, one childish naïveté that I have yet to shed is my absolute love for, and belief in anything and everything infomercial. I’m currently the proud owner of a Jack LaLanne juicer, multiple sets of free weights and 3 separate DVDs that promised to be the easiest way to lose weight EVER! There’s nothing quite like convincing yourself that as soon as “this next” package arrives, your life will change drastically for the better… I’m the ultimate consumer and QVC’s dream clientele… Yet, while P90X and The Firm collections accumulate dust on my bookshelf, my cookbooks are far from unused.

_ _ As mid-summer approaches, rather than strengthening my resolve to make this the season that I look smokin’ in a swimsuit, the hot weather has caused me to make a new resolution: “next year.” In no way is this dish a light summer meal, but it’s so darn good you won’t regret making or eating it. 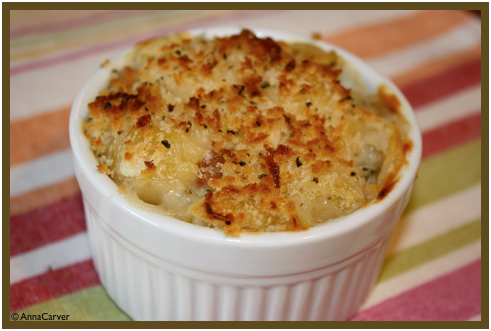 1. Melt 4 tablespoons of butter (reserving the other 2tbsp for later). Whisk in the flour a little bit at a time until it’s all incorporated, and then set the roux aside.

2. In a large pot, bring salted water to a boil and add the pasta. Cook until just barely al dente (according to package instructions) and drain. Set the pasta aside in a large bowl.

4. In a medium to large saucepan, cook the bacon over medium heat until crispy. Use a spoon to remove the bacon and set aside while keeping the bacon fat in the pan. Add the onions to the fat and cook them until translucent and then add the garlic. Cook for another minute or so, being careful not to let the garlic burn.

5. Add the milk to the onion and garlic mixture and bring up to a low simmer but do not let it boil. Whisk in the roux and cook for about another 5 minutes or until the mixture has thickened. Remove from the heat and slowly add the cheese, stirring until it’s all melted together and then add the bacon. Pour the cheese sauce over the drained pasta and toss until it’s all thoroughly coated.

6. In a small saucepan melt the remaining 2 tablespoons of butter and toss in the panko and dried parsley. Allow it to cook over medium-low heat for just a minute and then remove from the stove top.

7. Divide the pasta into ramekins (I used 6 oz baking dishes and this created 7 individual servings) and sprinkle the tops with the panko mixture. Place the dishes on a cookie tray and bake on a high shelf in the oven for 15-20 minutes until the cheese is bubbly and the panko crust has begun to brown. If after this time the panko isn’t brown enough for your taste you can turn the broiler on briefly, keeping an eye on the pasta to make sure it doesn’t burn.

2 thoughts on “Well, If The Pear-Shaped Shirt Fits…”