“I don’t often have the luck to dream like this. It is new to me for a nightmare to lead to a lobster. It is commonly the other way.”

-G.K. Chesterton, The Man Who Was Thursday

_ _ In life, my mom’s father has been both financially lucky, and savvy. A career in the Air Force allowed him to retire with multiple pensions: savvy; a company paid him to allow them to put up a cell phone tower on part of his several acres (and then didn’t stop paying him after the tower was no longer in use): savvy and lucky; he hit natural gas on his land and now can power his home for free: lucky; he created four ponds in which to raise catfish for profit, but they have now become his friends and pets, and at 89 years old he still makes the walk to them every day to feed his babies: funny.

_ _ I love my grandpa and I love these smoked salmon biscuits. They’re intended to be an appetizer, but filling enough to be dinner… and because they’re similar to a bagel with cream cheese and lox, I currently feel justified in eating them for breakfast as well. 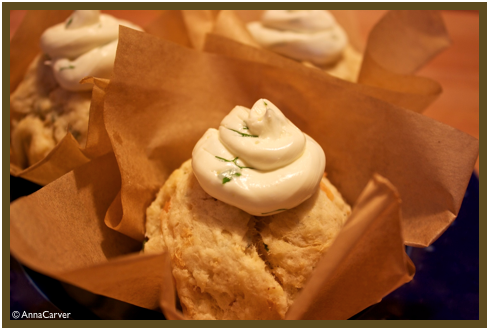 2/3 cup Smoked Salmon, crumbled (I actually had some canned salmon that I wanted to use up so I did half canned, half smoked salmon)

1. In a large bowl, sift together the flour, salt, baking powder and garlic powder. Use a fork to cut in the full stick of butter until everything is pretty well combined.

2. Add the scallion and salmon to the flour mixture and stir to combine, then mix in the buttermilk (by hand) and stir just until it’s a cohesive dough.

3. Cut up pieces of parchment paper so that you have 8 squares, approximately 5″ big. Nestle the paper into the muffin tin to form “cups” for the biscuits.

4. Divide the dough into 8 small balls and place one in each parchment paper cup. Bake for 25-30 minutes. They won’t really brown on the top, so if you’re not sure if they’re baked to your satisfaction, check the bottom to see if it’s browned and I actually broke one open and just ate that one myself.

5. While they are baking, whip together the butter and cream cheese until fluffy, then mix in the herbs, salt and lemon zest and mix until thoroughly combined. You can pipe it over top of the biscuits or serve it on the side. Garnish with some extra dill.