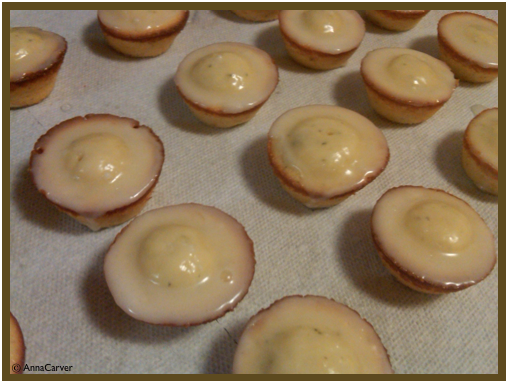 _ _I absolutely love to cook. And more than that, I love to cook for other people. Throughout my last semester of college I had a professor that brought us snacks… every single day. She’s the sweetest lady (and completely out of her mind) and this gave me an excuse to use her and the rest of my classmates as my guinea pigs for previously untested recipes. They were always met with general endorsement, but they were usually your average crowd-pleasers: chocolate chip cookies, pumpkin muffins etc… But on the last day of class we had a potluck, and I decided to go out on a limb with these lemon-thyme mini muffins.

_ _As soon as I got to the classroom however, my crippling need for approval from others kicked in and I self-consciously shuffled to the far end of the table and nestled my plate discreetly between two others; then I lurked in a dark corner, anxiously watching people’s faces as they tried my culinary work.

_ _One kid in particular caught my attention as he tried one… then two… “Oh my god!” He scooched the dish closer to him, “I hate these!” A couple inches closer, “no one else should even try these!” …He then proceeded to dump the rest onto his paper plate. He really hated them. And so do I. Hate as in love… Obsessed.

END_OF_DOCUMENT_TOKEN_TO_BE_REPLACED

“Grub, ho!” now cried the landlord, flinging open a door, and in we went to breakfast.” 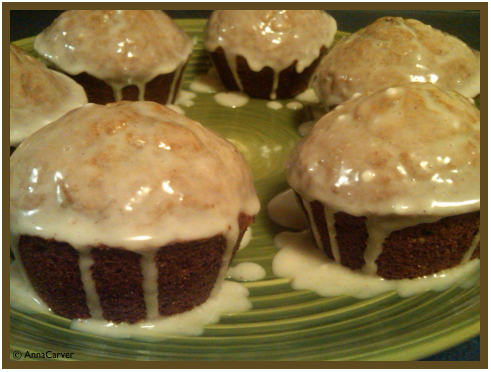 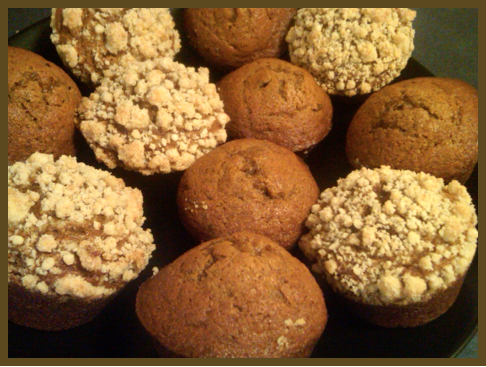 _ _I may have gone a little overboard with my pumpkin purée purchasing (and alliteration) this fall. I was very excited. But I’ve been stuck looking at all these lonely cans in my pantry giving me doe eyes and guilt trips about not following through on my promises to bring in the season with a pumpkin bake-a-palooza. I’m weak. I’m easily peer pressured by inanimate objects.

_ _So finally I succumbed and made these amazing pumpkin muffins. Normally suggesting putting fruit or nuts into baked goods would get you a slap across the mouth, but the raisins in these are so very necessary. I’m literally ordering you to include them. I’ve made these muffins both ways and the plain ones were just that… The toppings however, are totally optional. Half I made with streusel and the other half were dipped in a cinnamon glaze.

_ _With my roommates being responsible human beings, I can’t count on them to eat more than one muffin each, which leaves 21 for me to stuff down my gullet. I made this batch yesterday… only half a dozen to go.

END_OF_DOCUMENT_TOKEN_TO_BE_REPLACED

“People who have tried it, tell me that a clear conscience makes you very happy and contented; but a full stomach does the business quite as well, and is cheaper, and more easily obtained.”

(Photo courtesy of browneyedbaker until I can take my own!)

_ _Ok, so homemade bread may not be the most “easily obtained” thing, but it’s undeniably one of the simplest comfort foods… welcome to my obsession with carbs. This time last year I had never attempted to bake my own bread, and honestly the thought hadn’t really crossed my mind to try- until I came upon a recipe for homemade rosemary bread (and when I say “came upon” I mean I spend hours of my free time trolling for recipes online… that’s normal, right?) Frankly I was intimidated; I have a complex about being bad at things, which I’m sure is very Freudian but I wouldn’t know because I failed Psyche101. In any case, I didn’t run straight to the kitchen, but instead allowed the idea to percolate. That night, rosemary baked goods Freddy Kreugered my dreams (it’s a verb, trust me I’m an English major); I was positive that if I didn’t make this bread immediately I would die. Yes, die. So with the help of Pam Tolbert [hi mom!] who was nearby to keep my confidence high with comments like “don’t TOUCH it! The yeast is supposed to look like that,”  I tentatively stepped into the world of homemade bread… and I’ve never looked back.

_ _I do have to give a huge shout out to my life-saving Kitchenaid mixer, because since that first day I’ve tried making bread the old fashioned way, and when I do, I weep; I gnash my teeth; I cross going to the gym off that day’s “to do” list… it’s just way more work. But whether or not you have said mixer, the smell of delicious, baking rosemary bread wafting through your house will make all the effort worthwhile. Just go make it. Now.

END_OF_DOCUMENT_TOKEN_TO_BE_REPLACED

“Indeed, when I am in really great trouble, as any one who knows me intimately will tell you, I refuse everything except food and drink.”

-Oscar Wilde, The Importance of Being Earnest

_ _As a college student in perpetual poverty, I was reduced to offering my parents the gift of food and an IOU last Christmas… It was that, or show them what all the tuition for my English degree was going towards and present them with a literary thesis. In a macaroni frame. I went with the option that was less likely to make them cry. It was the holidays after all.