“This is every cook’s opinion –
no savory dish without an onion,
but lest your kissing should be spoiled your onions must be fully boiled.”
-Jonathan Swift

Everyone has different experiences that make them realize they’re officially old… For some it’s getting married, or having a baby, or getting into a graduate program (which I also just did *toot toot* <– my horn); for me, it was when I started having to Google the abbreviations that everyone was using on social media.

END_OF_DOCUMENT_TOKEN_TO_BE_REPLACED

So… It’s been nearly 8 months since I posted a recipe. I know this is an UNPRECEDENTED hiatus from Life Should Taste Good, but in my defense… I just didn’t feel like writing.

“The food so nice they named it twice!”
-Dale Denton, Pineapple Express

Post-Oklacoma, post-Nick redeploying, post-moving into my 6th new residence in less than three years, I had kinda lost my cooking mojo. What made me take pen to paper again, you may ask? Tuesday-night-Chardonnay number two. I wish it was more profound than that #imlying #ilovewine.

END_OF_DOCUMENT_TOKEN_TO_BE_REPLACED

“Chili is much improved by having had a bad day to contemplate its fate.”
-John Steele Gordon

The beautiful thing about chili is that it’s so customizable and quick to put together. The problem with chili is that I tend to throw in everything but the kitchen sink, so when it comes out amazing I never quite remember what I did! This recipe, while fairly simple, is sooo good and easy to make for a cold winter night.

END_OF_DOCUMENT_TOKEN_TO_BE_REPLACED 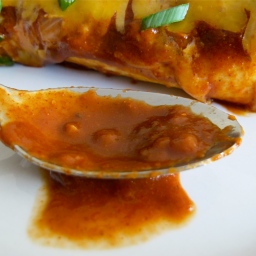 Since moving (yet again) to a new apartment, I’ve spent most of my time lurking on Pinterest and using the things that said lurking has uncovered, to get craft-y and make some *pretty amazing* decorations… I’ve also opted to not get cable in the new place. I told myself I’d really start reading again, I’d expand my mind and sharpen my intellect.

What has happened thus far is the discovery that I can watch the same movies an infinite number of times without getting sick of them. I have yet to decide what that says about me.

END_OF_DOCUMENT_TOKEN_TO_BE_REPLACED

This is every cook’s opinion –
no savory dish without an onion,
but lest your kissing should be spoiled
your onions must be fully boiled.
-Jonathan Swift

_ _ It’s the small victories that make me the happiest– perhaps because not many “big” victories have come my way– but I choose to think that I simply appreciate the subtleties in life. For example, I spent 10 minutes this afternoon trying to pry the cap off my lipgloss, finally resorting to using the knife on a wine screw, and I rejoiced riotously (ok, with a silent fist pump… I was at work and I don’t want to talk about why I have a wine screw in my purse) when it finally came flying off. I celebrate when a person trying to pass in the right lane gets cut off and has to drop back; I’m delighted when the song I want to illegally download is on Limewire and doesn’t turn out to be an automated recording reprimanding me for pirating music; and I’m on cloud nine when a recipe that I try ends up being a delicious meal. I give you: slow cooker french onion soup!